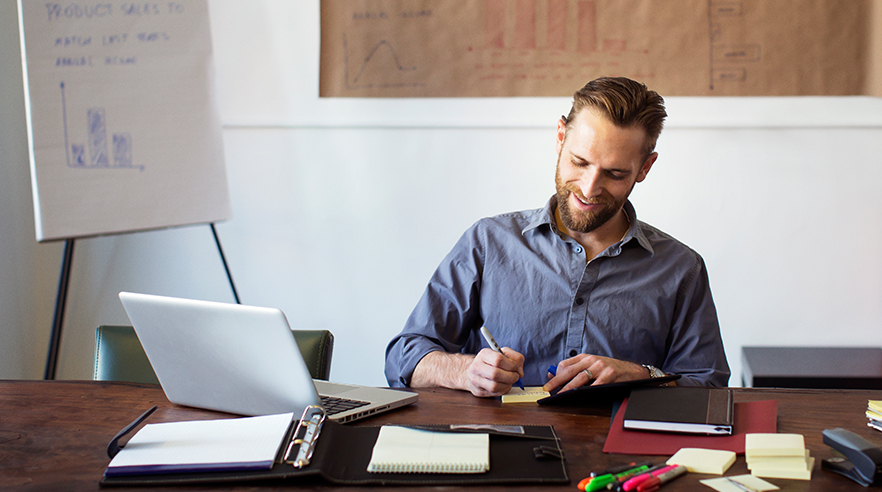 Has it ever felt like you can’t get ahead no matter how hard you work? You spend your days putting out fires or tackling a thousand little tasks instead of growing your business? Or your energy level is at an all-time low and the last time you had a spare hour to exercise, George Bush was in office? And we mean the first George Bush. So how can you get out of this vicious grind? Develop keystone habits.

What Is a Keystone Habit?

Glad you asked. Let’s start with the basics. A habit is a routine behavior. It is almost involuntarily–meaning, you perform it without thinking. Here’s why a habit is valuable: The less time you need to spend thinking about something, the faster you can act. When applied to business, good habits will allow you and your team to win. No complaints there!

So obviously it’s important to develop good habits. But here’s where things can get really cool. There are good habits. And then, there are incredibly awesome habits that matter more—the keystone ones. Keystone habits can transform your life and in the long run, your business. They set off a chain reaction, leading to other positive behavior changes.

The idea of keystone habits was first described by author and Pulitzer Prize-winning reporter Charles Duhigg in his book, The Power of Habit: Why We Do What We Do in Life and Business. We’re such fans of his work, he’s been a guest on our EntreLeadership podcast several times.

You can check out Duhigg’s EntreLeadership podcast episodes here.

Why Are Keystone Habits Important?

In our interview with Duhigg about keystone habits, he  gave several examples how they can change your life. The classic one is something we can all understand–exercise. You decide you want to lose 30 pounds, so you make a plan to hit the gym three days a week. Sitting down for dinner after a workout, you may find yourself reaching for the salad more often than the left-over pizza.

You’re starting to feel good about your body, so it’s easier to make the better choice. And since your eating habits are changing, you start to be more conscious of what you buy at the grocery store. So, on your next grocery run, you select more fresh foods and limit your impulse-buys, like ice cream or candy bars. See what’s happening? What started out as just exercise triggered a chain reaction of other positive habits.

What’s even more amazing that those secondary good habits don’t necessarily have to be related to the original one. Researchers have found people who start exercising also improve in other areas of their life, like using their credit cards less and doing the dishes more, Duhigg said.

“When you start to change a habit, it sets up this change reaction,” Duhigg said. “It changes other patterns in your life. And the reason why is because it changes your self-image.”

That’s great for you personally, but what about your business? Keystone habits work there too. You can focus on one area for improvement, which naturally triggers advancements in other areas. You’ll learn more about boosting your business habits below.

What Is a Habit Loop?

To take advantage of keystone habits in your business, you first need to understand how habits are formed. Duhigg said they’re developed through what’s called a “habit loop”. There are three elements of a habit loop:

We all use habit loops every day to do an array of tasks—from leading meetings to approving payroll. These loops can become so powerful and unconscious, they help us complete even the most complex tasks automatically. Ever gotten lost in thought while driving home from work, then wondered how you ended up parked in your driveway? That’s the power of a habit loop

How Do I Get Started With Keystone Habits?

Alright, so we know what habits are and how they’re formed. The question is, how do you find those game-changing keystone habits and harness them to improve your business? There are four simple steps based on Duhigg’s research:

What Are Some Mistakes People Make with Keystone Habits?

A major slip-up people tend to make with keystone habits is biting off more than they can chew. You definitely don’t want to overdo it! After all, anything worth doing is worth doing right. And habits can’t be built in a day—that’s not the way our brains or bodies work. So, focus on one major change at a time.

Another big blunder is forcing a habit that isn’t driven by your values or going after a goal you don’t truly want to achieve. That might sound bizarre, but there are a few reasons why people might pursue a new habit without having their heart in it. Like selling something to someone who doesn’t need it, for example. If you try to institute change that doesn’t align with your company values, your team members won’t care. It won’t bring about positive, lasting change.

Everyone will have a different set of keystone habits that’s unique to their company. But they all share this trait: Once you have a keystone habit in place, the improvement it brings doesn’t stay boxed in a corner. It spreads to other areas, creating a domino effect of positive habits.

Learn more about habits and how they can speed up your business and personal development with these resources:

Want to grow personally and professionally every day? Subscribe to the EntreLeadership podcast to learn from today’s top business and personal growth experts.